2015 has been a busy year for talks and conferences! It’s been amazing getting to interact with a range of audiences. I have several talks coming up, so please check back here or follow me on Twitter for the latest news about these presentations! 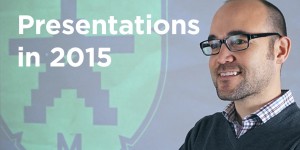 I’ll also be presenting on the history of technology and media to the Smithsonian’s National Museum of American History this November.