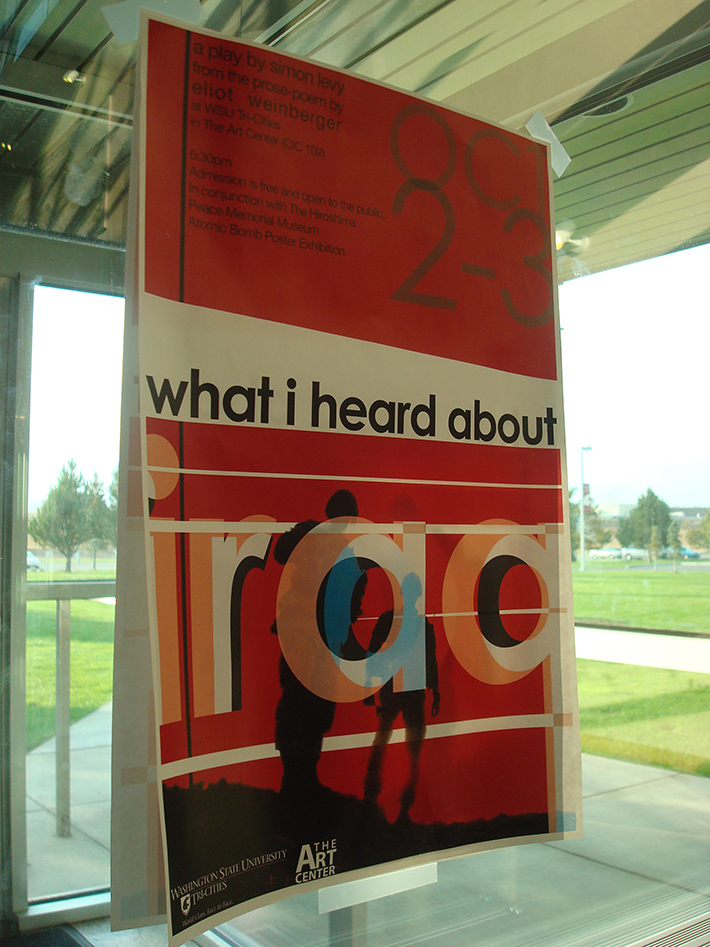 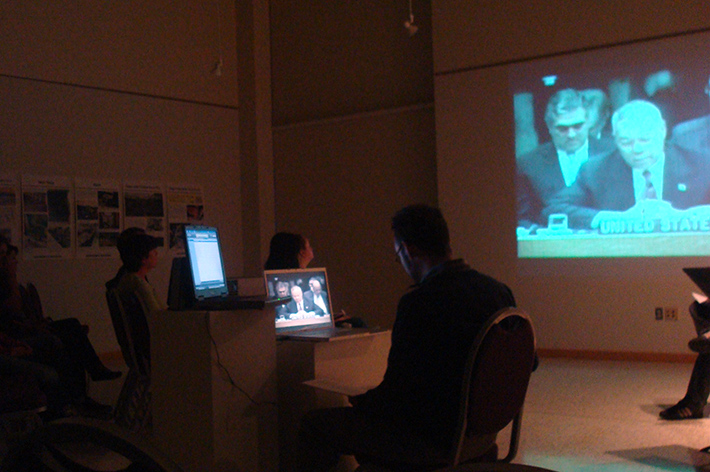 What I Heard About Iraq portrays a range of perspectives about the Iraq war, bringing contrasting voices into a single performance. Set in a black-box theatre, five actors played several roles presenting the words and experiences of people such as soldiers, families, politicians, news anchors, and Iraqi citizens. This production blended live performance with a multimedia experience that remixed news footage, video from airstrikes, sounds from the field, and interviews.

As the multimedia designer for this project, I gathered this range of media and mixed it in during the live performance. While doing this, I was set in the middle of the room between the actors and the audience, occupying a middle ground between these two realms. The large screen pulled focus at precise moments from the live actors, yet my small laptop screen was visible at the same time, competing with the visual attention of the audience. For a war like this one, which was increasingly fought through screens at a distance (and conveyed through screens to the world), the multimedia aspects of this show created a form that matched the content about a mediated war where live bodies are increasingly distant from each other during combat. As an emblem of Jean Baudrillard’s The Gulf War Did Not Take Place, this multimedia performance forces the audience to question the changing role of liveness and nearby bodies in an era defined by distant communication, distant battles, and increasing otherness of that which not “local.”

The multimedia design methods for this performance drew from a long tradition of found objects, bringing these found objects into conversation with remix culture of the digital age. I drew much of my material from existing archives of news footage, from YouTube videos, from found sounds that mimicked the imaginaries of war, and from actor reenactments of interviews captured by the range of characters the play portrays. It blended my own voice with the many voices that have spoken about the war. It embraced polyvocality. As a multimedia practice, the performance was, in essence, a bricolage of many elements that, when put together in the same room, spoke to the complexity of the Iraq war, its immense sorrow, and the human toll of war.